I went back and refined it a bit more.. added in some s&s on the body and dragged the eyes and brows a little, plus I added in a couple of suggestions from this guy right here.
Posted by Carlos Fins at 10:10 PM 31 comments:

Quick test with a new rig

I found this great little rig over on Animation Buffet called Simple Bot, and I thought I'd do a test with it and see how the rig handled. I like it a lot. There are a couple of issues with the eyes intersecting the geometry, and the squash controller being a little wonky, but I really like it. I plan on doing some more elaborate exercises, but for now I thought I'd do a jump. I want to go back in a mess around with the eyes and stuff, but it's late and I gotta get some sleep!
Posted by Carlos Fins at 11:16 PM 9 comments: 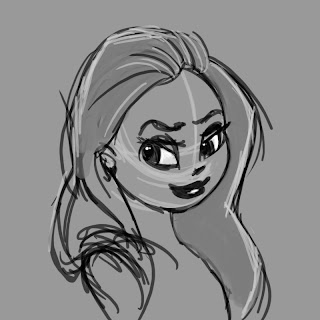 I'm trying to get better at drawing women. For a while my drawn women looked like men with bad wigs on. Now I think I'm getting their curves right.. need to work on my proportions and placement of features.

I found something really interesting in a book that I have at home. I have this book called "Industrial Light and Magic: The Art of Special Effects" by Thomas G. Smith. This book came out back in the late 80s, and I have fond memories of going to the bookstore and sitting in the Film section and drooling over all the cool images they had in there. Back then, I used to love to build toys models and I would dream about working at ILM as a model builder. Funny that I took towards animation in my later years. I still enjoy building and painting models, but with two little ones running around, I don't get much time to build them.
Anyway, in 2007 I decided to look up the book, and found it new on Amazon for about 50 dollars or so. I seem to recall it being 80-100 back in the day, but either way, 50 or 80, the book was too much for me then. So I found it and quickly ordered it. When I got it, all those fond memories came back. The book is a must read for any Star Wars or Indana Jones fan.. it has some of the most gorgeous photos of sets, props and models used throughout a variety of special FX movies ranging from Star Wars to ET and Close Encounters. Anyway, I found something that I thought was pretty amusing. There's a section that talks about the Star Trek 2: Wrath of Kahn Genesis sequence. This was the scene in the movie where through early cg they did a shot where a special missile/torpedo hits a barren planet, and it's instantly covered in vegetation. The interesting thing is that this sequence was done by the Lucasfilm Computer Division, and they used a special computer that they designed called the "Pixar" machine. This division ultimately went on to be purchased by Steve Jobs and become what we know as Pixar. I thought I share a few paragraphs of this section here:
"At Lucasfilm the goals are somewhat more ambitious. An image computer device named Pixar has been developed by the Lucasfilm Computer Division, and it already figures prominently in ILM's special effects program."
.skipping ahead a paragraph..
"When Steve Spielberg saw the Genesis sequence that ILM did for Star Trek II: The Wrath of Kahn, he asked if it would be possible to do a whole film using this technology. I cautioned him that those few shining moments he saw on screen were the product of a great many dull hours of computer time. It did not mean that we had conquered the scanning process; we were limited by current computer technology. Later, Walt Disney Productions releases Tron, a film that publicized the fact that computer images were used in ambundance. Observers of the film industry watched closely to see if this meant a new chapter in film history was about to unfold. Some predicted that if computer images caught on, it would be as big a revolution as the advent of sound with the Jazz Singer in 1927. Unfortunately for Disney, the film did not make much of a mark - it was not a success at the box office and did not mark a sudden revolution in special effects computer applications. Indeed, it seems unlikely to me that there will ever be a time when, overnight, computer-generated images will sweep over the visual effects field; there is too much technological development involved. Still, a quiet computer revolution is underway."

So I thought that was interesting. I guess in some ways he's right, the computer didn't replace practical effects overnight. Computer hardware was expensive and slow, and the software was just not there. He goes on to list all sorts of reasons on why it would not be practical, citing floppy drives and storage.
The book is an amazing read. I would almost say this is the Illusion of Life for the special effects of the late 70s and 80s. It has all sorts of great info on their processes, like different cameras used, hi speed photography, and even blue screen.
Posted by Carlos Fins at 9:01 PM 3 comments:

Here's a great blog that's combining the pencil test videos floating around out there into one concise blog. Pencil tests are an excellent source to study and analyze. Great stuff in there!
Posted by Carlos Fins at 8:41 AM 3 comments:

Been doing more sketching as of late, but I promise next week I'll have a new animation to show!
These are just some roughs I did following Preston Blair's book, as well as some stuff while watching cartoons with my boys this morning. Oh, and that mad looking turkey is a concept for a friend's idea for a tattoo. 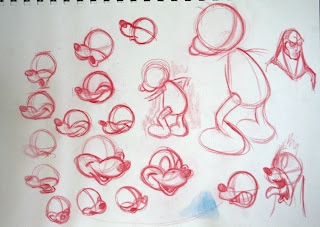 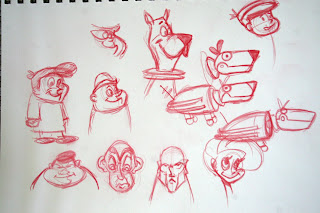 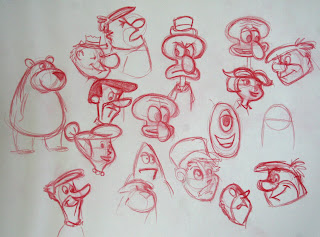 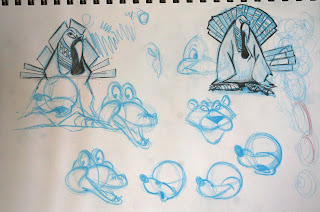 I noticed a particular person on the highway, and I thought I'd share about my observations of this person. So I'm on I-15 Southbound, heading home from work, when I noticed this pick-up truck ahead of me. It was a pick up truck, American made, with a camper. The back of the truck had all sorts of Army stickers on it. "Army of One","Rangers," etc. Even the license plate was a vanity plate that made a reference to the military. But what made this truck stand out and catch my eye was this little detail that the owner of the truck decided to add. There they were.. down at the bottom, dangling from the tow hitch: truck nuts. It's been 3 years since I've seen a set of these vulgar plastic nuts. And here I was, after having moved from Miami to Washington State to then NC to now Utah that I encountered them again. And in Utah of all places??
So anyways, here was this truck, decked out with military bumper stickers, and truck nuts dangling in the air, and I start to pass alongside of it. Now, here's the kicker for me. I immediately start to picture what the person driving must look like. Then, I start to think about who this person might be.. Is he current or ex military? Is he a Billy Bad Ass? What's his deal? I start to pass him on his left, and in moments, I pass the driver's side window and get a look at this guy. Here's a sketch of what he looked like: 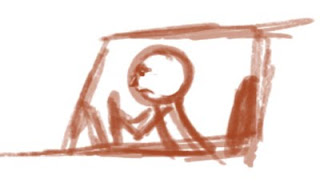 So my primary purpose of this sketch was to capture his pose, which I found totally at ends with the image this person was conveying with his truck. After all, he was sporting truck nuts! These things:

So what gives, right? Now maybe this guy wasn't the owner of the truck, or whatever. But I found it interesting how my first observation of the truck and it's "decorations" made me subconsciously picture a certain "look" or "personality" for the driver, and when I saw his posture, I was totally thrown off. I totally pictured someone sitting like this guy here: 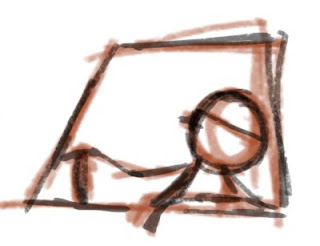 Someone hanging back and chillin', basically. Not arched towards the steering wheel like he's learning to drive for the first time. Again, that person very well might not have been the actual owner. Maybe in his head he was annoyed about having to use his buddy's truck for some errands, and thus having to drive around town with those offensive plastic testicles hanging from the tow hitch. Either way, I thought it would be a great analysis of how we instantly perceive things, and automatically judge someone just on their apparent display even before seeing who the individual is.
Posted by Carlos Fins at 7:32 PM 3 comments:

I need a scanner 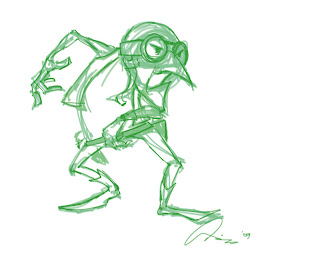 I've got some sketches and even some watercolor stuff I've done that I'd like to put up, but I don't have a scanner!
In the meantime, here's a doodle on sketchbook pro. Not sure what this dude's deal is.. cowboy-esque pilot or something?
Posted by Carlos Fins at 11:46 PM 3 comments: